This is a post from my other blog “Random Thoughts From a Random Guy”.  I’m posting this here too just to let you all know I haven’t disappeared off the face of the earth.  I still have my love baseball and baseball cards, but I am currently in the process of trying to purchase a home for my family and haven’t been purchasing any cards.  I will be back, hopefully by the end of the summer.  Here is the post.

Sunday was a big day for me, I took my kids to their first Chicago White Sox game.  If you know me, then you know I try to get to at least a couple a year, some years more than others but I usually at least make 1 game a year.  Since our money is tight, I purchased the tickets in February when we got our tax money.  I purchased us 4 tickets in the handicap section so Cheri could go with us and prepaid for a parking pass.  With the majority of the cost taken care, it made it a lot easier to take the family this month.  All I had to pay for was gas ($35 for half a tank, freaking ridiculous), tolls and food.  I just had a birthday so I had a little spending cash to help with this trip.  Normally when I go to a game, I save money by eating before I go since the cost of food and drink is outrageous but since the kids had never been there, we ate there.

After a quick hour and a half drive to the stadium, we pulled up to US Cellular field.  The reasoning behind the handicap section was mainly for 2 reasons, too much walking to get to your seats and back out to the car, and a more comfortable seat for Cheri to sit in.  While she probably could walk it and sit in the stadium seats, she also would be in pain for a few days afterwards.  But it ended up being better for the rest of us to.  We went through a special gate with very little line (once we figured out where it was), got to ride in an elevator to our level, and our seats were more or less, a row of our own.  The section is essentially the last row in the lower level.  There is a railing around it (with cup holders attached) so we wheeled Cheri up and they brought the kids and I fold up chairs.  Since all the assigned spots are wheelchair accessible, which means they are wider than normal seats.  So our seats of 4 end up being in a section big enough for 6 seats.  Plus since our seats aren’t attached like the rest of the stadium, you can sit back a bit and have lots of leg room.  Plus you can kick back and put your feet on the railing around the sections.  Basically, it’s sort of like your own box section.  We could stand if we wanted to, lean back, stretch, pretty much whatever we wanted without disturbing anybody else.  It was nice to not be confined to your 1 little seat, especially when your fat ass barely fits in that 1 seat.

You can kind of see the section in the picture above.  Lots of room, right behind the nachos in a helmet stand.  When we first got there I tweeted this. 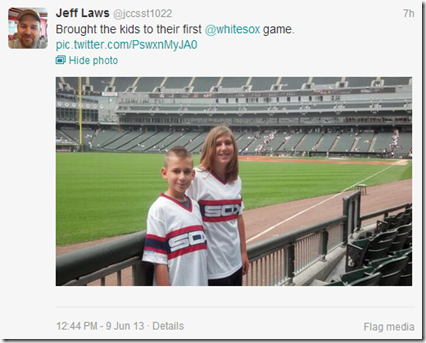 You can see their free jerseys that they got at the gate.  I took them down to the field to get a close up view and took that picture.  But just a few minutes after I tweeted that, I got this response.

Sweet!  So the kids and I headed off to find the the Guest Relations booth.  It ended up being behind home plate so after we grabbed their certificates (and a calendar), I figured I’d take them around the rest of the stadium and circle back to our seats.

On our way back around, we ran into these 2 signing autographs.  That would be Tony LaRussa and LaMarr Hoyt.  LaRussa was the manager of the 1983 team and Hoyt was a Cy Young winner that year for the same team.  The White Sox are celebrating the 1983 season every Sunday by wearing the throwback jerseys that you see above and on the kids.  The line was huge so I wasn’t about to stand in it but I did cut the line just to take the picture. 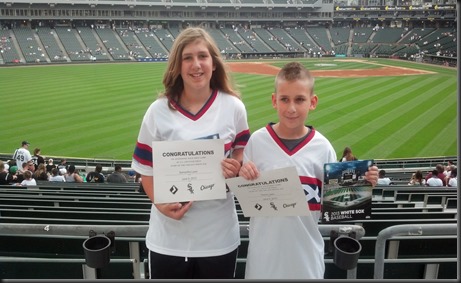 Here’s the kids in the outfield, showing off their certificates and calendar.  Just for all the smart asses out there, this was an hour before the game started, that would be why the seats are empty.  I don’t want any stupid Chicago Cubs fan making snide remarks, like this idiot did after I tweeted the following.

I don’t know who that is and he doesn’t even follow me.  We weren’t even playing the Cubs (I checked his account, he’s a Cubs fan) so he had to have either been following the @WhiteSox Twitter feed or the hashtag #GoSox.  So he was specifically look to start crap with someone.  I’m tweeting about the great day with my kids and then this idiot steps in.  Luckily, I don’t let anyone goad me into an argument on the internet, I know that’s what they want, so I ignore them.  People are idiots.

Anyways, anytime Cheri and I do something memorable, we always take a selfie.  Plus I took one to use as a profile picture on Viggle. 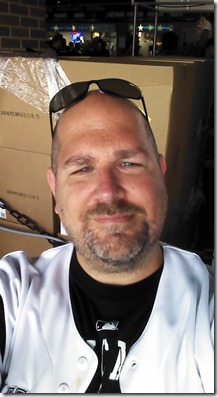 All in all, I had a great day.  The White Sox won, the kids got to see 3 home runs (1 by the A’s, 2 by the Sox) and they got to see the stadium.  I got to see a great game, some action on offense and a couple of great defensive plays.  I think the kids had a great time but they didn’t really seem very interested in the game itself.  So it might be awhile before I drop that kind of money on taking them to a game again.  Then again, it would make a nice family tradition to do a game every year.  We’ll see next tax season.

Here’s a picture taken by the Sox staff that you have to pay to get developed.  Hence the watermark. 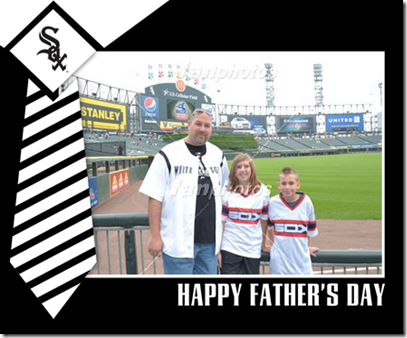