I had another softball game tonight and I'm still upright so that's a good thing. Even made it to 2nd on a double, that's pretty good for my fat ass. It was also the last day of my work week as I have a vacation day tomorrow. Another good thing is that I came home to a couple of cards. A Hall of Famer and an ex-Sox who left on a sour note.

I actually thought this was a 2016 just because I hadn't seen it before then all of the sudden I seen a couple of Ebay. I won the 1st one I bid on at $.40.

I also managed to pick up this bat relic card of Magglio Ordonez for $2.25. I wasn't happy with the way he left the Sox but he was a force to reckon with in his day, it didn't help he left and went to Detroit of all places. I did really like him when he played for us though.
Posted by Jeff Laws at 11:12 PM 1 comment:

I came home after work yesterday and worked on replacing the radiator in my car. I should say I watched mostly as my stepdad did all the work. We eventually got it in and running but I didn't have time to post the cards I received, which is a bunch. This morning, I got up and went to back out of the garage and I had no power steering. So I took my wife's car to work and when I came home, my stepdad came back over and we had to replace a belt, which was a pain in the ass, but it's done.

I did receive another card in the mail today, only it's one I didn't order. So I sent an email to who I think sent it to me, I won a 1993 Leaf and received a 1992 Leaf so I assumed it was from him. I also had to open 5 requests on cards I haven't received in over a month and had to send a message to another seller who is trying to invoice me $50.00 for shipping on a 7 card lot. I checked his feedback and he has 4 negative. All of them were lots he tried to charge shipping on after they sold cheaply so I'm guessing I won't see those.

It hasn't been a good day. Let's get to some cards, that might cheer me up.

I picked up both of these cards for the Vintage collection. I picked up the Scherrer for $.12/shipped/ and the Brookens for $.07/shipped.

I picked up another Mark Buehrle for that collection. I grabbed this for $.42/shipped. I like that all 3 ERA leaders that year from the AL Central. World Series winner too, I wonder who that could have been.

Picked up all 3 of these Konerko's from the same seller. These 3 cards put my Konerko collection at over 400 different cards. Oddly enough, they were all listed as singles but I won all 3 for the same amount, $.38/shipped.

I also managed to get this rookie auto of Tyler Danish, he is currently in the minor but he did make his major league debut this year. I'm not positive but I think he got called up to cover for a bit because of injuries before being called back down. I picked this card up for $3.63/shipped.
Posted by Jeff Laws at 10:35 PM No comments:

I'm not doing jack today after having to work yesterday so I have lots of time to throw up a Random post.

Jeff sent me this one earlier this year, he has always been generous toward me with his White Sox dupes.

Another card received earlier this year. I listed all his teams since they don't really list a team on these Goodwin Champions card. Not a huge fan of this set because of the photos used.

I got a bunch of cards for my 1973 Topps and my 1981 Topps sets from Josh back when I was only collecting those 2 sets, pre-vintage collection.

Another card from this year, which I guess shouldn't surprise me because my list of cards I add all the new cards when I receive them and I'm still trying to log all the older cards so there isn't as many. This is one of the better Robinson cards and yet it's not, just because he's in his Maize and Blue, except they photoshop the wings off the helmet.

I can't believe I have to follow a Michigan man, with a Notre Dame guy. I'd say it was a joke from Random,org but all it gets are the numbers. Another card from Jeff, I told you he likes to hook me up.

Bonus My Baseball Card Obsession random card. I random that blog until a card that isn't part of my collection comes up, check it out.

Wow! It took a few randoms before I got to a non-collection card but man I wish this was part of it. What an awesome card. A 1953 Bowman card of Pee Wee Reese.
Posted by Jeff Laws at 3:20 PM 1 comment:

It was an unusual Saturday as in I actually had to work, and go in an hour earlier than normal at that. I made the mistake of napping to long after work yesterday and couldn't go to sleep last night so not going to bed till 1:00 am and having to get up at 4:30 am did not help me any. After I got off work, I picked up my daughter at a friends house and then came home, showered up and headed out to my cousin's kids graduation party. I finally got home for the day and found an envelope sitting on the kitchen counter. I opened it up to 1 card but it's a nice card.

My first auto of Matt Davidson although I believe I have another one coming in the mail. He is currently in the minors which is probably why I picked it up for $2.75/shipped.
Posted by Jeff Laws at 8:25 PM 1 comment:

I did get some more cards in the mail yesterday but I had some car trouble after work and then had a softball game so by the time I got home and showered, I just didn't feel like getting online to post so we'll do 2 days of cards today.

3 cards, 2 Player Collections, a Fisk and 2 Schmidt's. All 1981. I believe I've bid on the Donruss Schmidt before and could never win it so it was nice to finally get it.


4 more vintage as you can tell. I only put a quarter plus a few pennies (like I usually do) on the 1980's vintage which if you saw the last post, you know I still manage a bunch.

I did get one for the White Sox collection as well, got it for $.54/shipped. I remember trying to get all these cards as a kid. I believe they were wrapper mail ins or something. I think I got most of mine from card shows and trading with other kids.

The next 3 cards I received today from 2 sellers.

I picked up this auto of the former White Sox pitcher, I say former because he was traded in early June for James Shields, who hasn't exactly panned out, yet. I grabbed this auto for $2.99/shipped.
Posted by Jeff Laws at 11:07 PM No comments:

I didn't disappear this time, I swear. I didn't get any cards on Thursday and if you have followed this blog for awhile then you know that the family goes camping on Father's Day weekend so Friday after work we took off and didn't come back until Monday. So I have lots of days and lots of cards to make up so this will be a picture heavy post. I'll keep the pics smaller as to not suck up all your time waiting on them to load.

I don't know what days everything came in so I'm just going to post everything I got from Friday thru Monday. If you remember last week, I had said something about all the vintage cards I had bidded on, well they started showing up this week.

Like I said, I got lots for the vintage collection. I did manage a few player collections pick-ups as well.

I got a couple of more Jordan's and I actually ran across another Chris Getz.

That was everything I received while I was gone, but I hadn't posted a couple of days since then, so here's what I got on Tuesday and today.

Again, lots of Vintage and yep, a few more for the player collections.

Both 2005 UD Classics from the same seller, both Hall of Famers, but wait, there's 1 more. 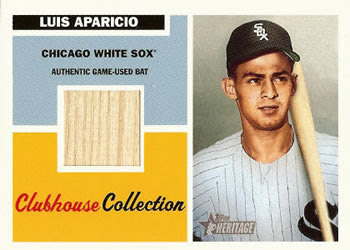 I can't believe I got an Aparicio game used bat for only $3.82/shipped. That's a great way to finish a catch-up post from the weekend.

Everything should all be back to normal tomorrow now that these 63 cards are out of the way, now I just have to get caught up on the other blogs.
Posted by Jeff Laws at 10:11 PM No comments: