Lots of 2's in the Maize and Blue

If you read yesterdays post, then you know where I'm sitting right now being as it's the 4th. Hopefully most people go back to work tomorrow and fireworks won't be going until real late.

I got my recent purchases (including a 434 card box from Sportlots) logged and I'm about half way with the scanning. I did all the few card players but I have some stacks of players with a lot of cards left. I'll probably knock those out tomorrow.

Today you get a team post, which narrows it down, a lot. 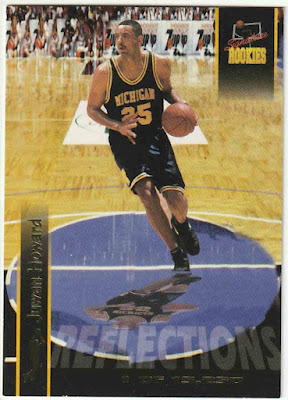 We'll start with this card of our current basketball coach that Dennis sent in his latest package. I don't have very many of him in his Michigan colors, this card makes number 6. 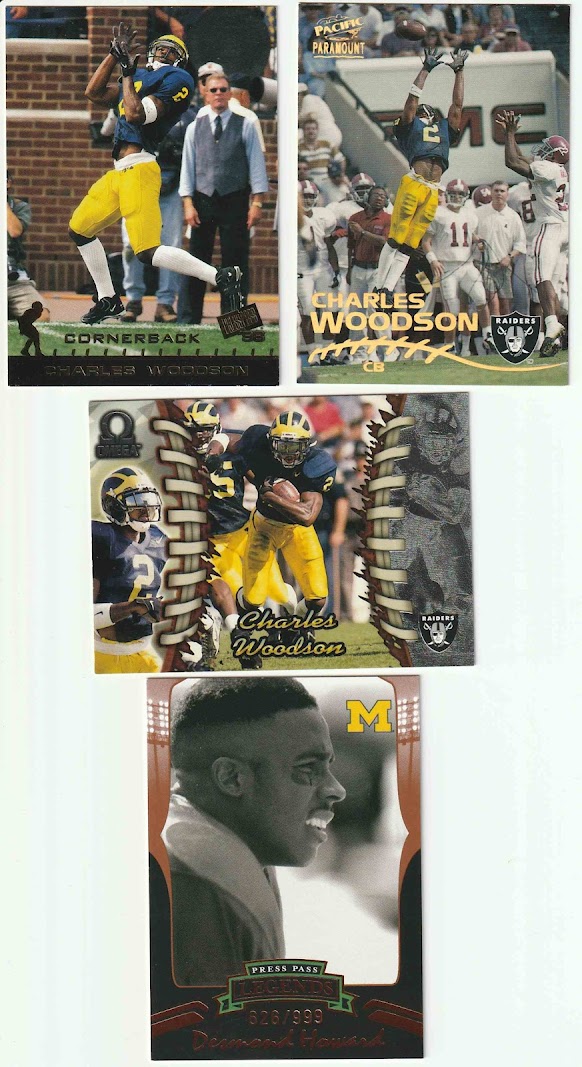 I picked up all these at the last Shipshewana show from Hollister. The 3 Woodson's give me 13 of him, I have more of him because he's starting to be included in modern day sets. The Omega and Paramount are listed as rookie cards. The Desmond Howard is only my 4th of his in the Maize and Blue but it's my first one that's numbered. All 4 of those cards were from his half off box. 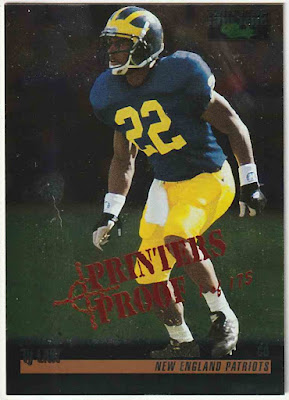 I got this from Hollister as well but I think I grabbed it from him when I saw him at my LCS. He had his half off box with him and let me go through it. It's a printer's proof and has a print run to 175. It's my 7th card of Ty.

I figured I'd go ahead and post tonight since I'm sitting in the storage room with one of my dogs because he's petrified of fireworks. At this time of the year (and New Years) we drag an old recliner from my son's room into the storage room, bring down a TV tray and lay out some blankets for the dogs to lay on. I was down here for about 4 hours, until midnight last night. I'm sure it'll be about the same tonight.

Today's guy, just got back from the IL where the majority of our team has spent time on this year. If you follow my cousin's Instagram, then you would have seen the last card earlier today. 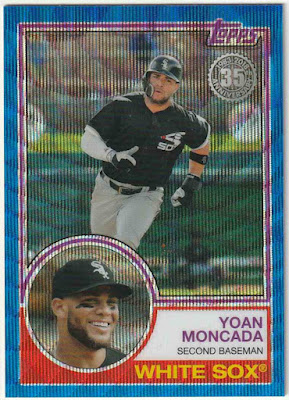 I picked up this Blue Wave Refractor numbered to /75 at the Shipshewana Card Show from Josh (he's the dealer that sold me the 1982 Topps box). I just happened to see it on his table when I got together with him so I grabbed it and he gave me a deal on it. 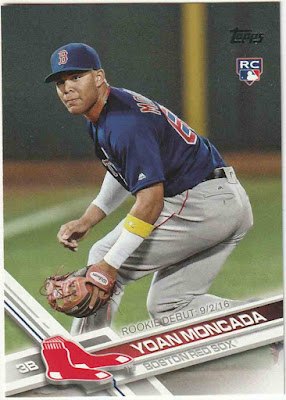 I picked up this rookie at my LCS. I hadn't been able to find one at a decent price for awhile but I found it in his dollar box which I end up getting for free because my cousin spends so much, he throws my dollar box stuff in for free. That's why we combine our purchases when we buy. 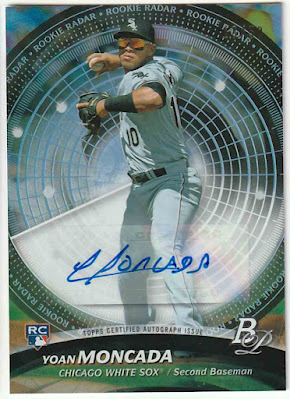 I picked up a few autographs of Sox players that I didn't have any auto's of as well. Starting with this Moncada one. I ended up paying a little more than I would have like but it's licensed, a rookie and numbered to /50 so there was a reason I paid a little more. Plus it has a cool background.

These 3 of Yoan put that collection at 171 cards.

This got posted later then I had planned since I had to put my 70 lb dog on my lap while the neighbors were shooting their fireworks off.

The White Sox have actually won 2 against San Francisco so far, going for the sweep tomorrow. Sadly, Minnesota keeps winning as well so we're not making much ground in the division.

Speaking of San Francisco, this guy is playing there now. No, it's not Carlos Rodon (although he is in San Francisco), he plays a different sport and just won a Championship there. 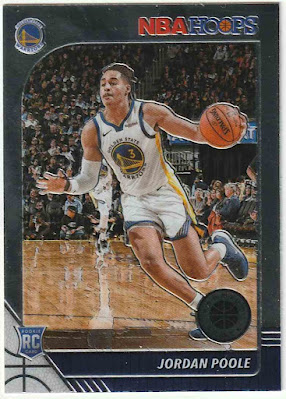 I picked up this Poole at my LCS, it's a Premium Stock which is just a shinier Hoops card. 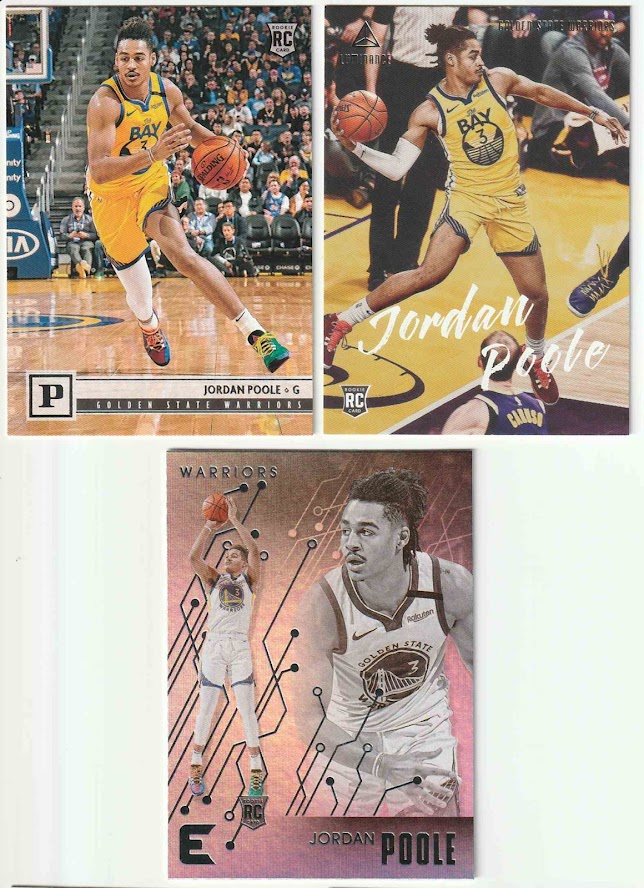 While all 3 of these look different, they are all Panini Chronicles. If you follow my blog, you know I'm not a big fan of Bowman. To me, these are the Bowman of Panini. The one saving grace is at least they say Chronicles on the back so you can figure them out. I picked up these 3 at the card show in Warsaw out of the dollar boxes.

These 4 cards put my Poole collection at 28 cards. It's nice that Michigan has some talent in all 3 major sports and they are putting out more cards of them.

My brother and I were talking about USC and UCLA joining the Big Ten. His thought was it'll suck for them to come and play in the snow and then it was, I hope they don't play night games on the west coast because those are 9 or 10 o'clock games here.

Which is where I'm at with the Sox now, they are on the west coast so I didn't get to watch any of the Angels series live, but it's the weekend now so at least I can watch the Giants series.

Today's post is my all-time Sox favorite player, who once had the chance to sign with the Angels for more money but stayed with the Sox. One of the many reasons I like him. 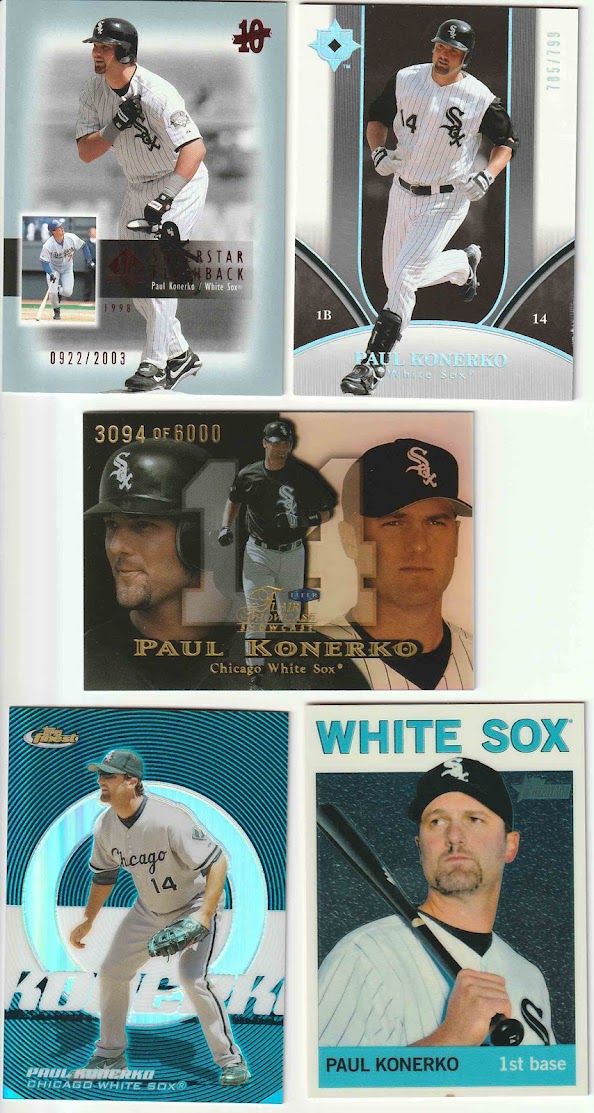 These 5 came from Dennis. They are all serial numbered. I really like the horizontal one with the 3 pictures, I like the look of it. The Finest is pretty cool as well, it's a Blue Refractor. 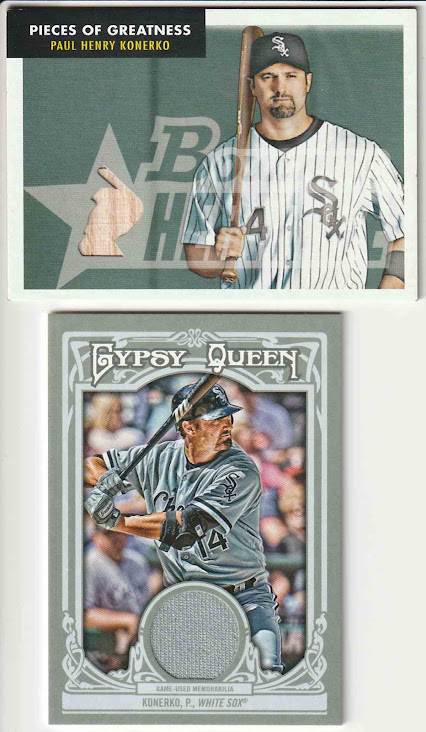 He also sent me these 2 relics of PK. I thought I had the top one but I had a parallel of it and the Gypsy Queen is definitely new. I have 19 relics of Konerko now and these 7 cards give me 718 cards of him.

Be sure to check out Dennis over at Too Many Verlanders.

Today, you get a Hall of Fame shortstop who didn't play for the Sox, but he did play for Michigan. 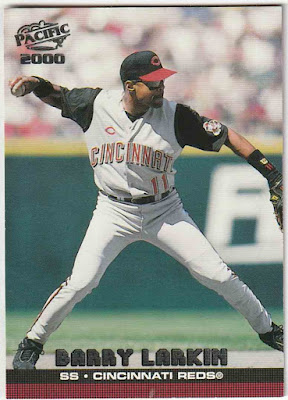 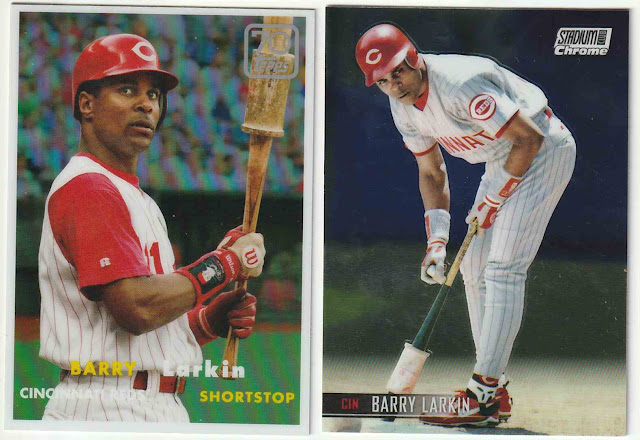 These 2 more modern cards I picked up at the card show in Warsaw. I like both of these no bordered cards and they aren't overused shots. Plus a vintage look and a Stadium Club chrome, you really can't go wrong.

These 3 cards give me 695 cards of Barry. I know I have more down on my desk from that Sportlots box that just came in so we'll see if I can hit 700.