I took some time this morning to catch myself up on the cards I've had come in in the last week. I got a few from Fred as well as some I picked up yesterday at the show even though I wasn't going to buy anything. The bad part was I ended up having to scan over half of them for the TCDB so it took longer than I was hoping. That also means I got some good cards if there weren't that many images yet.

You don't get to see any of those today though because the random said so. Today you get a Michigan player collection who I haven't added to in just over 2 years. 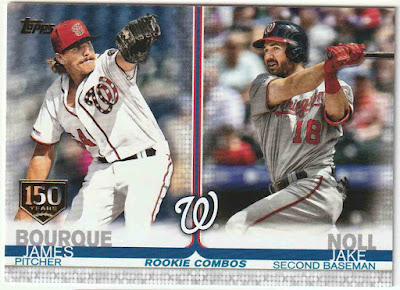 I got this in my mailbox from Sportlots. I had a couple of them shipped direct because it cost the same and this was one of them. This is the 150th Anniversary version, it's also the 4th variation I have of that card with more to come when the rest of my Sportlots order gets here.

This is only my 5th card of James Bourque but it puts me in a tie for the most of TCDB. He only has 43 listed so that would be why.