Thank God it's football season because I can't watch the White Sox anymore. After 8 straight losses, they finally won today. I gave up weeks ago, apparently they did too. I don't even know if I'm going to watch the game from today. One more week and I won't have to worry about the season anymore. I'll just have to sit back and see who stays and goes for next season. I've already read where LaRussa won't be back so that's the first step.

On to better things, It's now Michigan season. The fall and winter sports are Michigan football and basketball (men and women). I don't really watch the NFL or NBA, can't stand them to be honest. I would watch baseball and even softball if they would ever play it on the Big Ten Network.

Today's post is another guy who I thought left too early. I seem to think that a lot so I'm not sure if I'm upset that they are leaving or if it's true. A few guys have proved me wrong but not many. 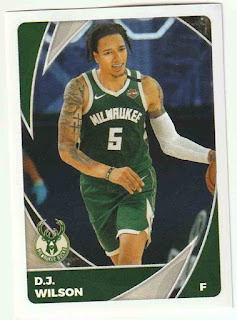 This is another one of the Sportlots purchases that I had sent direct to me because it costs the same. I believe I have more of him in my Sportlots box which came the other day but I haven't even opened it up yet. Maybe tomorrow after I take the old lady to her MRI.

This is only my 3rd card of DJ even though it's technically a sticker.