The show today went pretty well. A lot of dealer's struggled to get their table money back but we were easily over 1k so we did pretty well. It was the first show at this venue and most of the dealers took it in stride because it was a good atmosphere and most signed up to come back to the next one.

Michigan didn't play as expected today but it was still a win so we'll take it. Definitely room to grow. Blake Corum was pretty much unstoppable. He's reminding me of my favorite UofM running back but with more speed.

Today's post is yet another started player collection. He's another Michigan guy who just went pro last year and this is the 1st card of him that I've gotten. 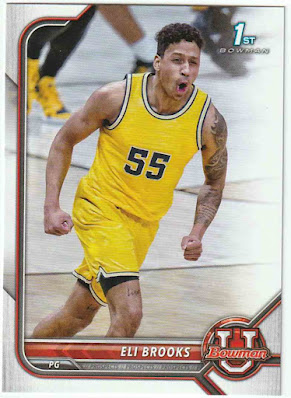 The one thing that I was really looking forward to with the NIL deal was more cards of players before they left the university. Enter Bowman U. I hate that they don't have a license but I like that I can get cards early. I have one of the aforementioned Blake Corum and he's still playing at Michigan.

This is my first card of the Professor. I'm always amazed at how much he grew as a player in his years at Michigan. When he started getting playing time I couldn't figure out why he was there but as a Junior and Senior, it was obvious why. Such a great college player and I really liked him. Last I heard, he signed a summer league deal with the Pacers.

For the record, Eli's PC is my 108th player collection.