Heading to the WS

Another day, another card. I like the weeks where I end up with a bunch of days with cards in the mailbox. Really, what could be better? I had noticed that I've done a pretty good job of posting when I get cards. Usually, that lasts for less than a month and I start slacking. I looked at my total posts tonight, and this will be my 121st post this year and I was comparing it to previous years. It's already way past last year, which was my slowest year but at the pace I'm going, this year will should have the most posts since 2012 and will probably be my 3rd highest year since the first 2 years I started the blog.

I've kind of found my groove and it may not be great for keeping followers or even pageviews but it's what works for me. If I let cards stack up and I get behind, than I keep putting it off and my stack gets bigger and becomes more of a process to get caught up. So I've learned to post the day I get the cards, it works for me. I also don't like to spend hours typing out a post. I'd rather do a quick post and spend the time working on my cards and getting caught up with getting them all logged. Like I said, it doesn't make for great posts, but it's what works for me and it shows in my total posts.

Anyways, if you're still with me, here's the card I got in the mail today. 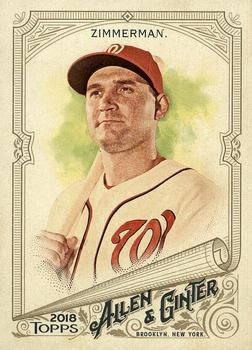 I didn't think I picked up very many cards of Zimmy but this is my 13th this year. It's nice that I got it a day after they clinched their birth to the World Series. I'm not going to lie, I was pretty happy that Washington made it the year after Harper signed his big money contract somewhere else. It puts a smile to my face. Back to Zimmerman, this is my 105th card of his and I grabbed it for $.54/shipped. I'll be rooting for him to get a World Series ring. They will be the underdogs against whoever comes out of the AL and they haven't won one yet, so I'm rooting for them.
Posted by Jeff Laws at 10:47 PM