More Barry but not the last

My cousin and I drove up to a LCS in New Buffalo, Michigan today. It's about an hour from here. I didn't buy anything as I'm on a tight budget for a couple of weeks but I was really impressed with the shop. It was really clean and organized. The shop closest to me, here in town, is really small with boxes just thrown all over. This one had a back room with boxes and boxes of cards organized by year and manufacturer. In the middle of the room there was a table with chairs so you could pull a box from the shelf and sit at the table to sort through it. Really smart idea. My cousin picked up a few cards but as I said, I didn't get anything. I have a problem shopping at card shops because unless they have dime boxes, I know I can probably find the stuff online cheaper or it's just something way more than what I going to pay anyways. It was really nice shop and I was impressed and told him so.

As for today's post, you'll get to see a familiar face, again. 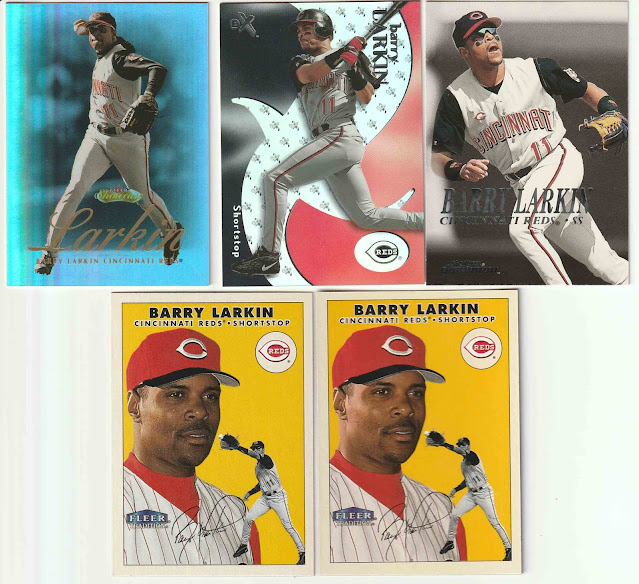 This post will start with the 2000's, Fleer to be exact. I like the EX in the top middle. The bottom 2, one is the regular base, one is a glossy. 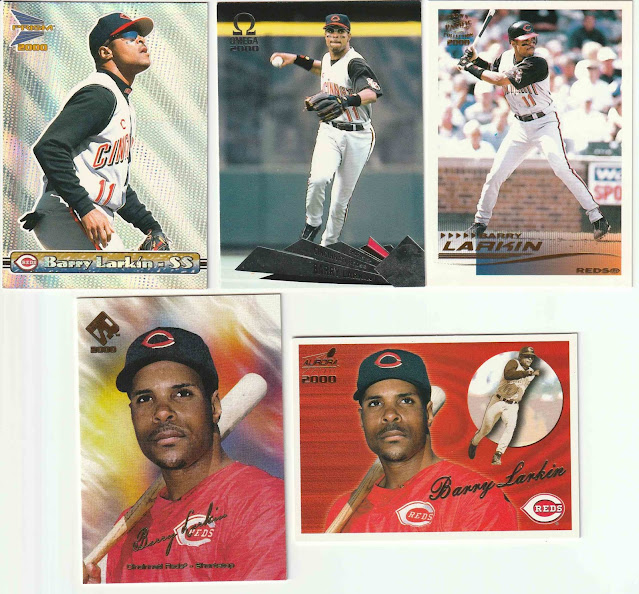 These are the Pacific from 2000. The bottom 2 look like the same pic but the bat angle is a tad different. 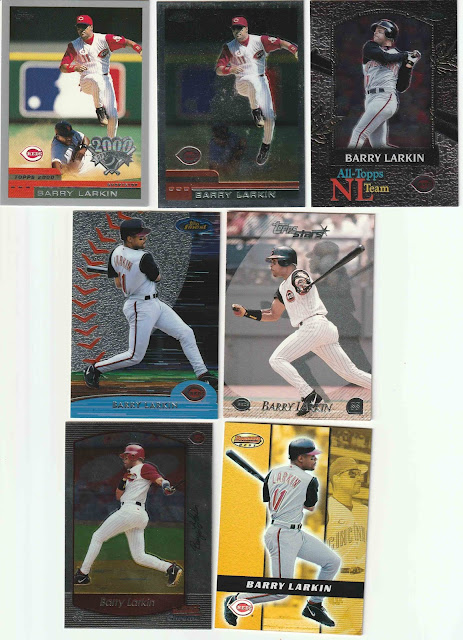 In the Topps portion, you see an Opening Day with a Chrome and I never knew that they did the inserts (or maybe just this set) in Chrome as well. The Finest is pretty cool and a couple of Bowman at the bottle. 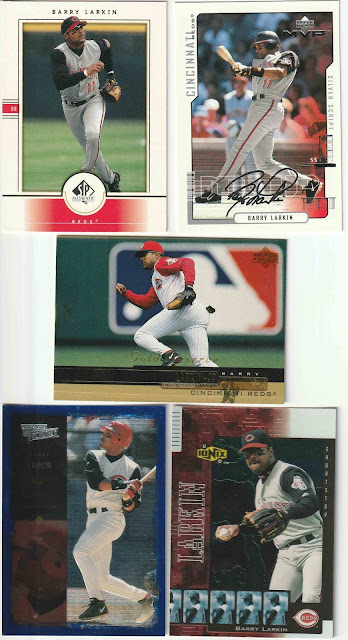 The Upper Deck's from 2000. The MVP is the silver script, the middle card is the Gold Reserve and the Ultimate Victory in the bottom is the set where they pulled a Topps and made the same set, but different. I'm not sure if I like the Ionix or not. I do in some ways but don't in other ways. 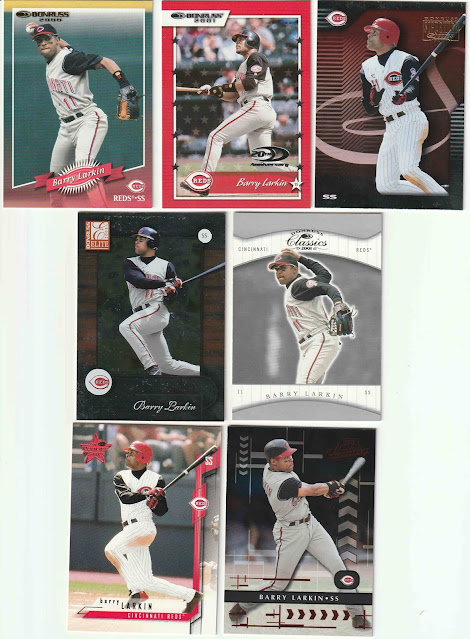 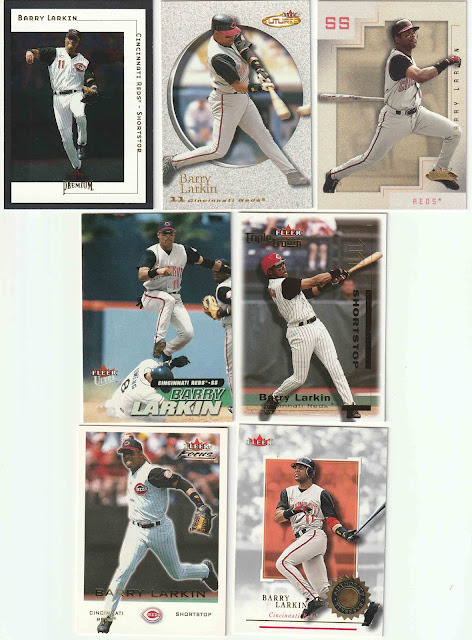 As you can tell in the early 2000's, Fleer made a big push and put out quite a few sets only to be done in a few years. You know the Ultra up there is easily the best card. No borders and a great shot. 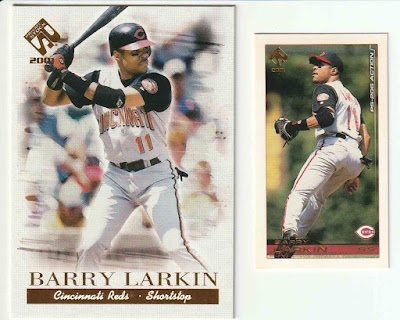 I even managed to grab 2 different 2001 Private Stock from Pacific. I guess technically 1 1/2 since one is a mini. 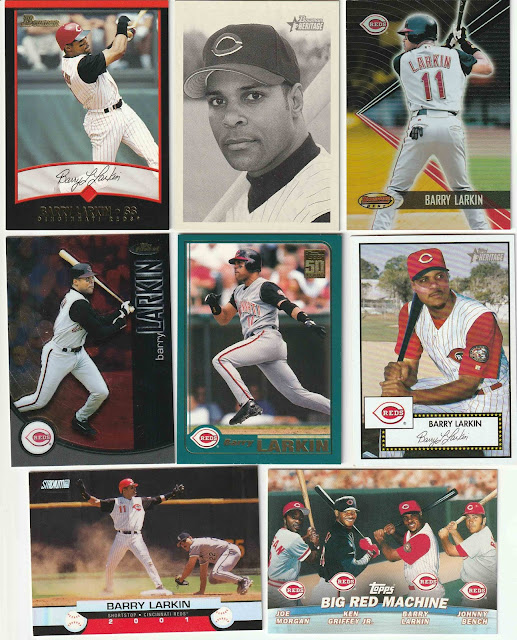 In the Topps portion, you get a lot of cards. That Stadium Club is pretty awesome with Barry playing umpire. I remember liking these Combos back in the day because you got today's players with older players. That one actually goes to the Johnny Bench collection as well. 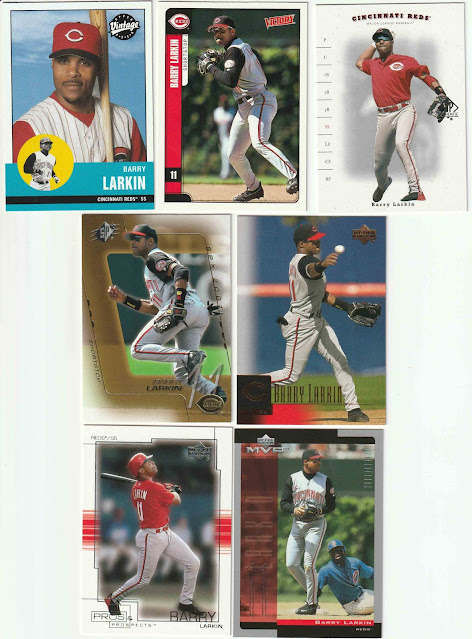 More 2001 in the Upper Deck variety. I say it every post of Barry but he has the most action shots of anyone that I've ever noticed before. 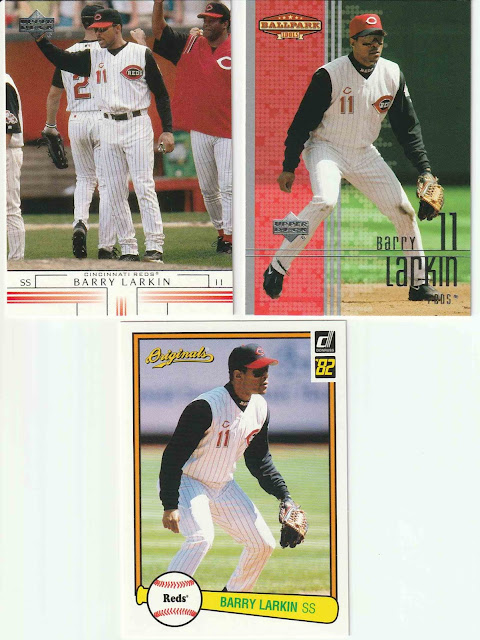 2002 Upper Deck and a Donruss vintage look-a-like. I never heard of the Ballpark Idols until I started buying like this on Sportlots. 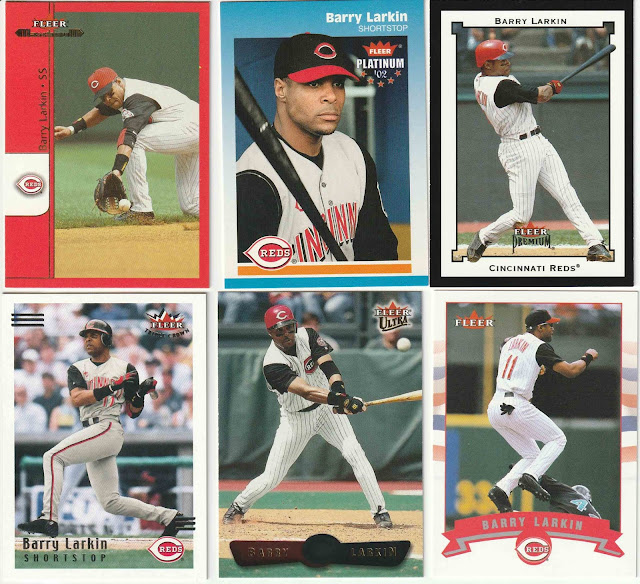 As I said, Fleer put out a bunch of sets. I like the Platinum because I have a fondness for the 87 set. Even if it is the only non-action shot. The last Fleer up there is the gold back version. 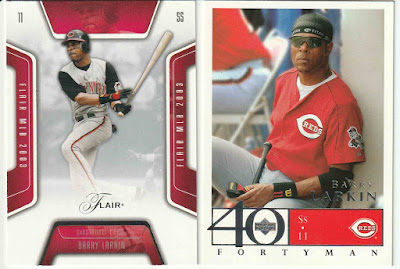 I picked up a couple from 2003 with this Fleer Flair and UD Fortyman which is the Topps Total of Upper Deck. 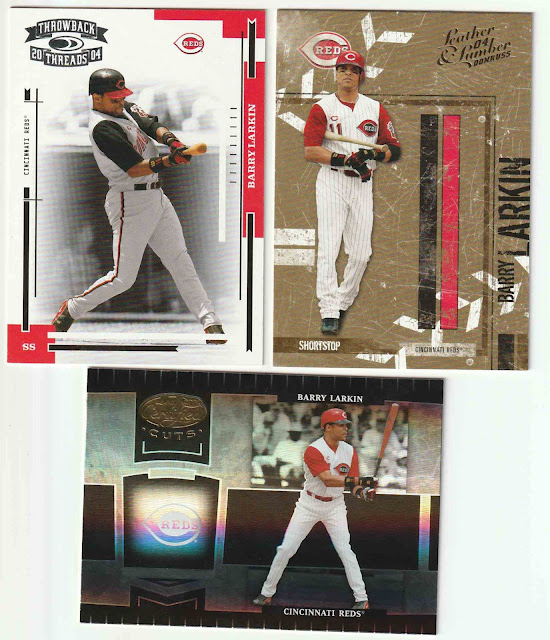 If you remember the last couple of posts, you probably remember a few of those Certified Cuts and I've already mentioned how much I like them. These 3 cards are all from 2004. I vagually remember buying a box of the Leather & Lumber back then.

Don't worry, I still have one more post of Larkin that you'll get to see as soon as the random deems it it's time.

I got a package from Sportlots on Tuesday that I haven't even opened yet, plus some cards from Dennis, Fred and Sluggo that I need to get organized tomorrow.