Well the Sox lost 3 out of 4 to the Yankees, in Chicago. We have 5 with the Royals and then go to New York to play them again next weekend. Either our offense disappears or our bullpen blows it. For a team that's supposed to be so good, they are underperforming. I realize we have some injuries that were waiting to get back, but with the talent on this team, we should at least be competing most nights. It's getting frustrating but it's still early and we're only 3 games back. Luckily the AL Central sucks, again.

Sluggo and I went to the LCS and as soon as we walk in, Hollister was there. He's the guy that we buy a ton of stuff from when we go to some of the card shows. I get a ton of Michigan stuff. He sees us walk in and we say hey, then he says, I have my half off boxes with me. So we made sure it was cool with the LCS and he let us go through them. I ended up spending $49 with him, mostly former Wolverine cards but I also grabbed a few vintage so you'll see those in the rotation. We ended up spending some more money at the LCS but I only spent another $24 with him. All dollar cards,1 relic and I had 7 or 8 dime box cards that he threw in with all the other cards. Sluggo and I always throw our cards together, as is most card places, the more you buy, the more they discount.

Today's card came from Hollister. I ended up changing all the cards I've bought from him from being labeled card show, to Hollister because I buy so many from him anymore. 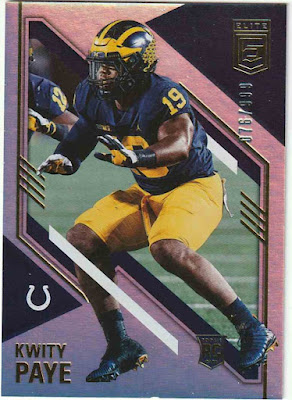 I picked up this numbered Elite of Kwity Paye out of his half off box. It doesn't have pink in it so I assume that's from the scanner. It was marked $4 so I got it for $2, actually less than that if you include the discount. This card gives me 12 cards of his.
Posted by Jeff Laws at 7:48 PM