A couple of firsts

Today's post will feature the first card I'm showing that I picked up at the National, it's also the first card of the player as it's a new collection.

On Saturday, my cousin and I got in the show with the dealers at 8:30 so we did some walking around before it got full. I found a guy selling a bunch of cards under $10, all were listed at half off. I picked this card up in those boxes. 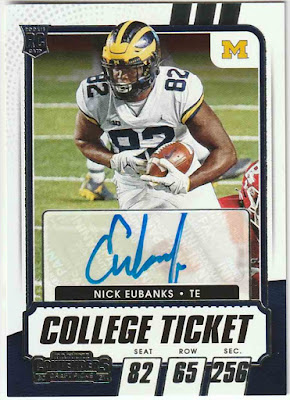 My first card of the former tight end for the Wolverines. It's a 2021 as he was signed as an undrafted free agent earlier this year but it's a Wolverine card anyways so it's twice as good. It was marked $3 so I only payed $1.50.
Posted by Jeff Laws at 9:14 PM