Just a quick post before I head off to bed. I worked this morning so I'm a little sleepy. I spent the rest of the day sorting my latest shipment from Sportlots and I'm still not done so hopefully I finish getting it logged in tomorrow so I can start scanning.

Today's random gave me a guy who I will have multiple posts of because I picked up a ton of cards of him, which should give it away that he played in the 90's when they pumped out a crap ton of cards. All of these are from 1997. 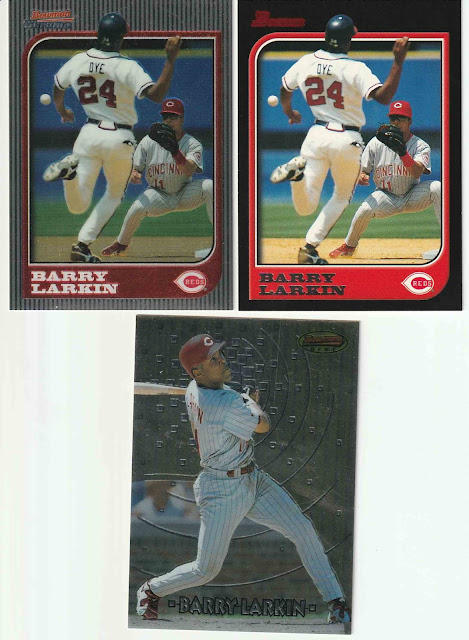 A little Bowman action with a special appearance by a White Sox World Series hero Jermaine Dye. While the 2 at top are a cool action shot, I don't know if it should have been used for Barry Larkin as he is more in the background. Dye pretty much takes up the whole photo. 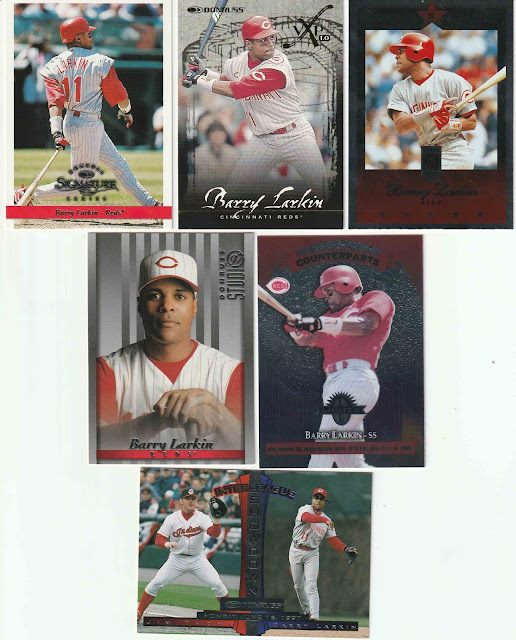 Lots of pre Panini Donruss. Another pre-Sox player on that bottom card with Jim Thome as well. Seems to be a theme. 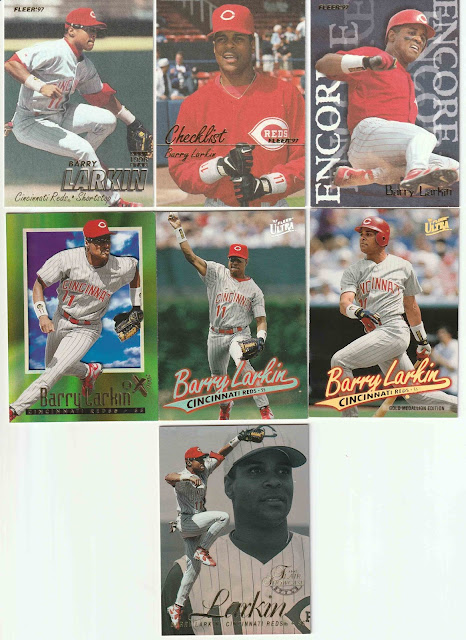 Lots of Fleer as well. The top row are all those paper thin Fleer cards of the mid/late 90's cards. The EX is kind of cool looking with the sky background. There's an Ultra and Ultra Gold. Not sure why there are 2 different photos but I'm not complaining. 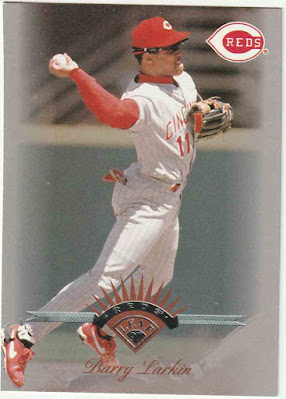 I supposed I could have added this Leaf to the Donruss section since there is only 1. 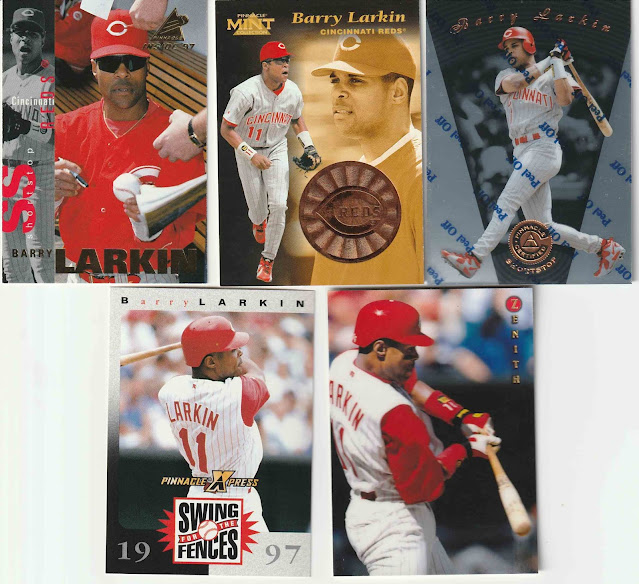 As we know, lots of Pinnacle around at that time as well. I think that middle card is the first one I've gotten that didn't have the big hole in it. They are pretty cool with the bronze logo in it. 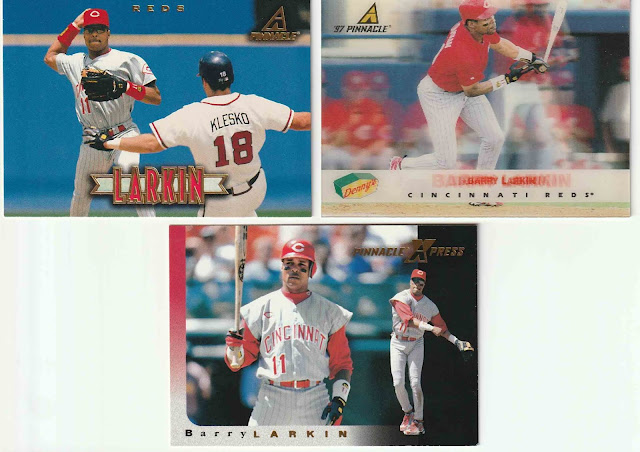 Some more Pinnacle of the horizontal kind. Another card turning a double play with a Brave coming at him. 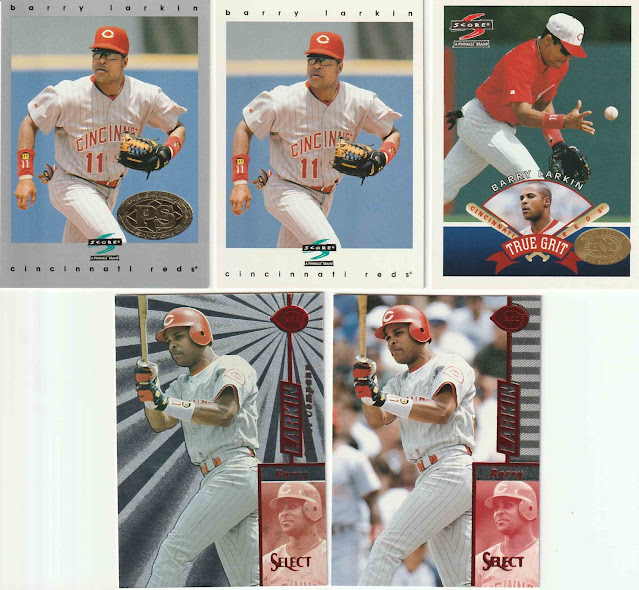 Next up is the Score section. The top corners are both premium stock which is a thicker version of the middle card. The bottom 2 are different variations (obviously) of Select. 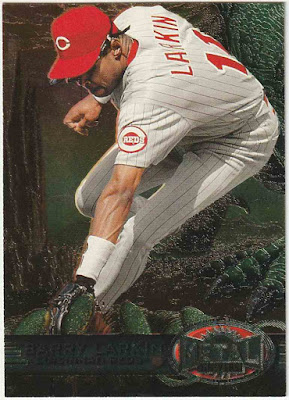 Another solo card for Skybox but I suppose like the Leaf, I could have just threw this in the Fleer section. 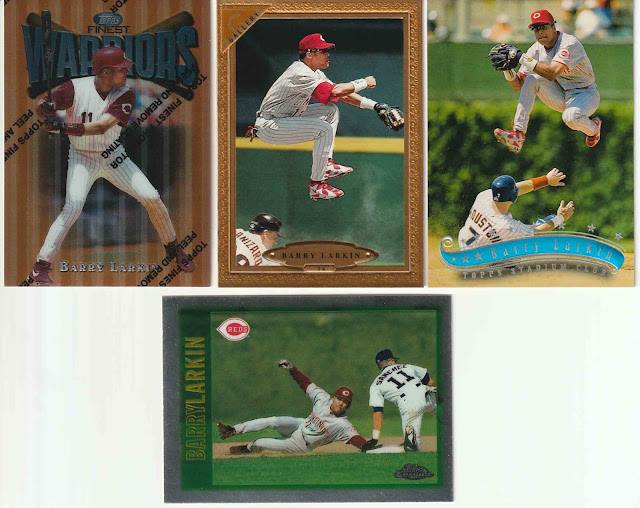 Here is the Topps section with a couple of great action shots. Really like the Stadium Club (when don't we through) and I like the Chrome at the bottom, it's a unique card as it shows Larkin sliding in. 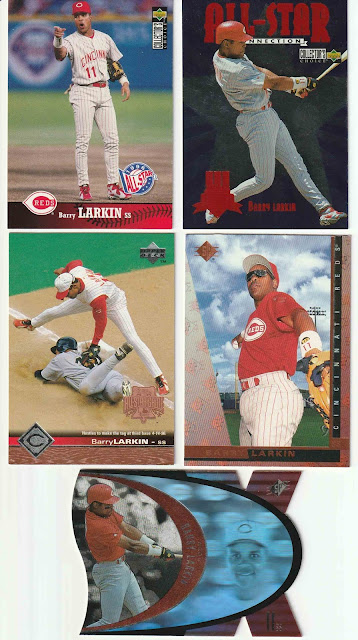 Lastly, the Upper Deck's. Another cool action shot that you don't ever see. and a cool die cut.

Now that I've done this post, there are a lot of great action shots in the 1997's. There are plenty more of Barry Larkin to come, as soon as the random allows it. I got a bunch more in the last package from Sportlots as well.