This will be a post with some of the young studs on the White Sox but oddly enough, the stud of our team right now isn't that young. He's the 28 year old rookie who has been in the minors and other leagues for the last 10 years. Yermin Mercedes has been killing it, starting his career with 8 straight hits and now sits 12 of 18. I don't expect this to sustain but man is it fun to watch right now. He only has 20 cards on TCDB, 12 are Topps Now and 5 of the remaining 8 are different variations of a 2021 Topps Autograph. I'm guessing he'll have a lot more coming out in upcoming sets. 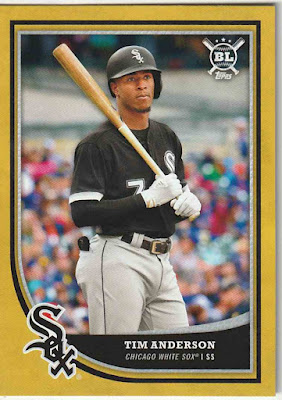 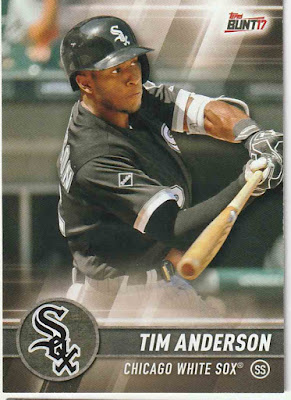 The 2 cards above came from Sportlots. Both were found while looking at finishing 2017 team sets. The BL Gold was just a bonus I ran across looking to finish the Big League set. The Bunt set is finished. 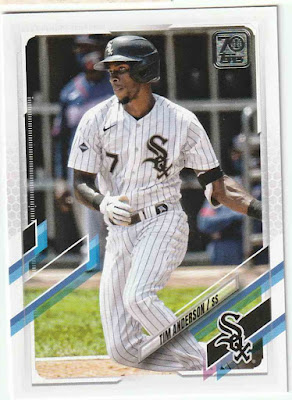 This 2021 came from the box breakers club from Chris at Nachos Grande. I know we've all complained about the small lettering on the front but now that I've seen them in hand, it's ridiculous that I have to put on my readers (glasses) to read the front instead of the hard to read back of the card.
Timmy is currently out, not on the IL but is taking a few games off to recover from a hamstring injury. These 3 cards give me 82 of him. 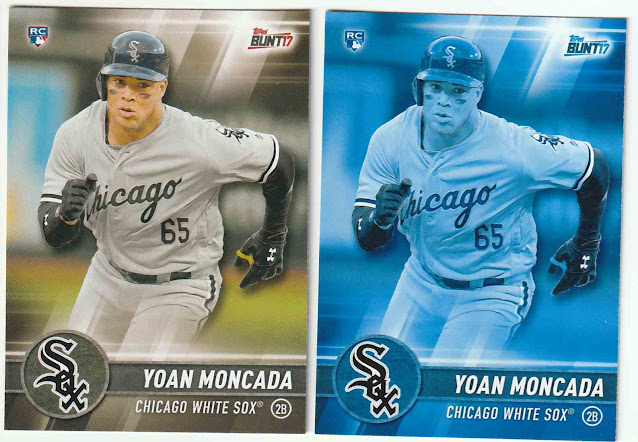 Next up is Moncada. As I said on Tim Anderson, I completed the Bunt set and the blue parallel was another one I ran across finishing that set. These 2 came from Sportlots. 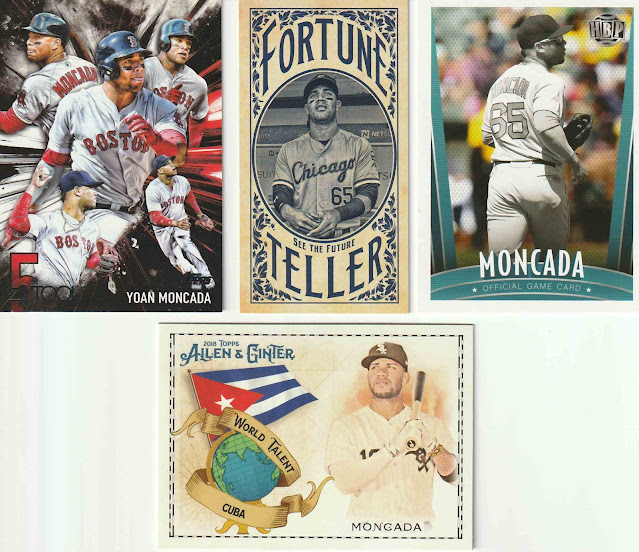 These 4 cards came from the LCS that my cousin and I visited. He had a White Sox box, all cards were a quarter. I grabbed these along with other players that you'll see later. 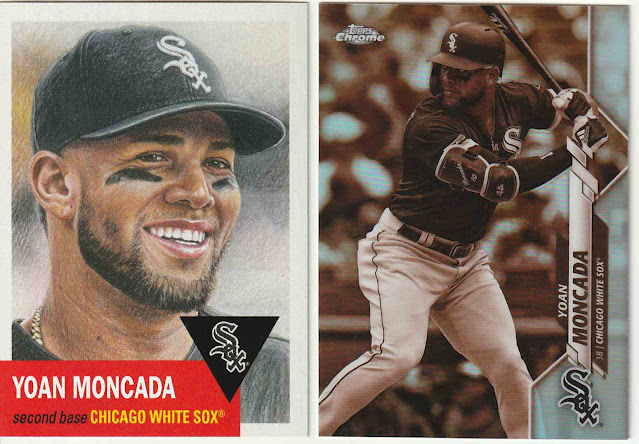 I picked up these 2 at the card show. I paid a couple of bucks (don't remember exactly) for the Living Set card on the left but only $.50 for the Sepia Refractor on the right. I picked up a number of those Sepia's for $.50.
These 8 cards give me 127 cards of Yoyo. 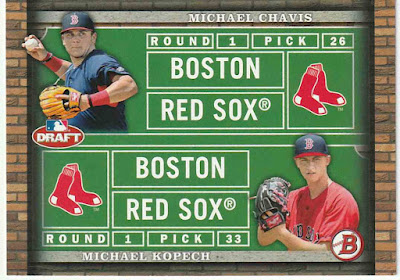 I picked up this card of Kopech on Sportlots so it was under $.50. 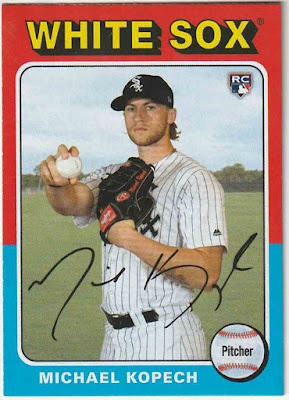 Fred brought me this '75 lookalike from 2019 Archives of the fireballer. He has looked good in spring training and so far out of the bullpen this season. Any stumble from any of our starters and I think Kopech will be taking over.
These 2 cards give me 48 cards of him. 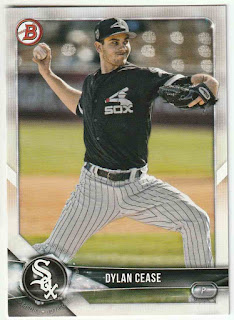 I only managed to grab one card of Cease and it also came from that quarter box of White Sox at the LCS. This card gives me 21 cards of our current 4th starter. 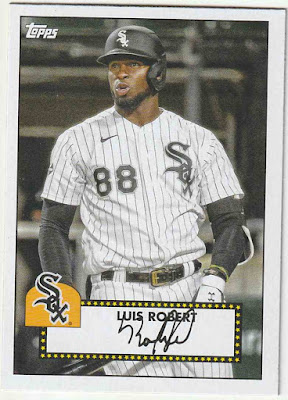 The last player of today's post is a popular one right now in the card community and I have trouble getting any on the cheap. I did grab the 1952 copy of 2021 Topps on Sportlots for $.18. I wonder if the seller didn't realize what he was selling because you don't find his cards that cheap. I also picked up a 2021 Topps that I already had just because it was only $.18. 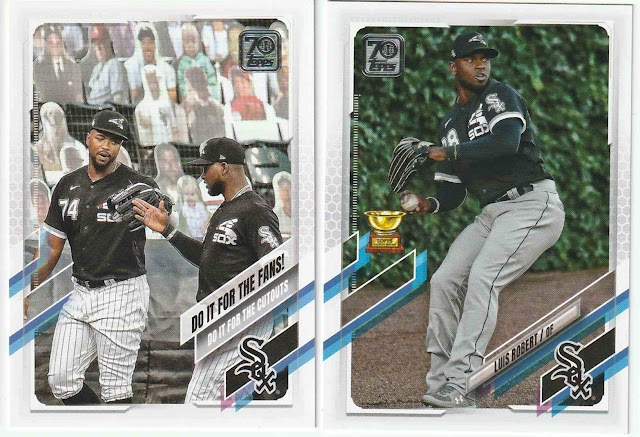 Both of these 2021 Topps cards of Robert came from Chris' box break. I like both the photographs on these cards (definitely not the design though.) 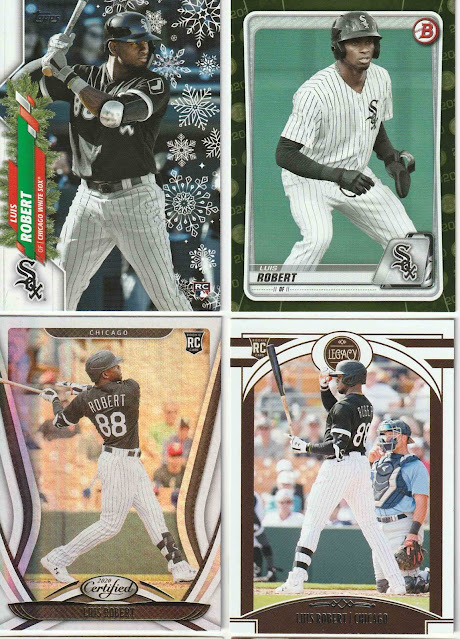 I also picked up these 4 cards of Luis at the card show. I might have overpayed but that's what card shows are for since I buy everything cheap every other day. The top left and bottom right were both $5 and the other 2 were $2.
These 7 cards move my Luis Robert collection to 19 cards. They were a big boost though because as I said before, his can be hard to come by.
Posted by Jeff Laws at 10:09 PM