Michigan won and is going to face an undefeated Michigan State next week. It's the first time both teams were unbeaten when they meet. Should be a good game. I don't ever predict games because I know anything can happen, especially in this game.

While today's post isn't football or basketball, it's still a Michigan guy post but it's baseball. I like to add to the Michigan baseball guys because it's a much longer road to the pros than those previous sports so the cards are harder to come by. Which make them hard to search for because by the time they do make the pros, they've been out of college for a few years and I don't remember them. It's not like I get to watch a ton of college baseball every year, I'm lucky to get a few games on Big Ten network. Unlike basketball and football where I can see every game. I have to keep a list of players drafted and check those lists occasionally. 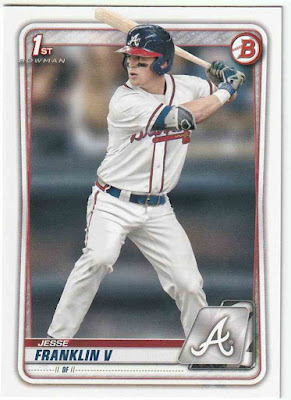 You'll get a Bowman card or 2 right away, then silence as you wait for him to make it to the pros. Unless he's a can't miss prospect, which is rare. This is only my 2nd card of Jesse, too bad he hasn't made the pros, I could have been watching him in their playoff run and World Series.
Posted by Jeff Laws at 8:27 PM